And They All Wore Blazers and Blue Jeans: The Digital Music Forum 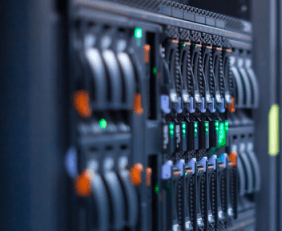 Thanks to Marty Lafferty and the Distributed Computing Industry Association for inviting me to speak at the Digital Music Forum East last week. I spoke on a panel discussing digital music access “from the cloud” and via peer-to-peer technology. I’ve been involved with digital music for a very long time. I began with digital music in 1993 when I was a lead QA and Support Engineer for the Sonic Solutions digital audio mastering products, which were the first generation of professional audio tools that ran on a desktop computer- a Macintosh back then. These systems were used by top music, movie, and film studios around the world and were, at the time, a primary platform for producing the master CD used by the factory for replication. The sale of CDs was a mature business, but the technology used to create them was still in its infancy. I was very fortunate and go to help support this new technology for musical heroes such as Peter Mew (engineer of the Beatles), Bob Ludwig (Gateway Mastering), and [XXX] of David Bowie’s engineering team. Many years have passed since those pioneering days, and I’ve seen many businesses come and go in the field of digital music technology. The Digital Music Forum addressed topics focused on the future of music in the digital age. The speakers, who ranged from top music company executives to heads of leading online music services like Limewire and Vevo seemed to come down on one of two sides of a viewpoint about the future of music in the digital era:

Some notable quotes that came out of the conference included some lines that sounded like this:

“Music companies, if they want to survive, need to hire consumer marketing people from companies like Proctor and Gamble who understand how to package and market lots of small retail type products.” “Out of over 100 online music start ups that rely on music licensing as part of their business, maybe 5 or less have produced a return on investment for their founders.” “There has never been a profitable business built on the licensing of music videos. Google gave up trying to do this and gave it all away, for free, to Vevo to give it a try, since they weren’t able to monetize music videos on YouTube.” “Vevo is able to support billions of views of music, thanks to the largess of its sponsor [Google paying for all the bandwidth and technology costs.] I’m a lifelong musician and fan of music, and a lifelong supplier of technology to the music industry. I see the future of music, digital or otherwise, this way: Where there is demand, there will be supply. Where there is demand of a product with a cost to its creation and distribution, there will be a markup and possibility of profit, therefore incentive to take risk on the business. Therefore the business of music has a future. The music business may not have a future, if it can’t participate in the business of music anymore, but the business of music does have a future. I think that most businesses who try to enter the field of online music services aren’t truly profit seeking- they are enamored with music and like so many startups (and so many musicians) seek to make it big by being acquired by larger company or even more wishfully, by shareholders via an IPO. Someone in the audience asked my panel if the music companies seek to be like those “greedy and profitable telcos”. My response was that most telcos have gone bankrupt in the last 20 years- and that the music companies understand exactly why: the telcos had no marginal cost, competed via rates, lost their ability to generate profit, and therefore lost their businesses. The music companies work in the opposite direction, intentionally keep pricing strong for licensing, because, as I said on the panel, in the words of a former business partner of mine in Brazil Carlos de Andrade once said to me, its best to “sell expensiveness.”

So the thread throughout the conference, behind all of the questions about labels, rights, music services, buyers, markets, and subscribers was easy to detect: money. How to make money from music. It seems to be an endlessly perplexing question throughout these shows- from the indie producers to the music start-ups to the massive and now unprofitable music companies. They are all looking towards the future and the ability to build success. My answer? Build a business based on per-unit profitability… and the rest will follow. They didn’t have any bands play during the networking breaks at the conference. Steve Lerner is a Practice Leader at RampRate and works with media companies on digital distribution technology sourcing and operations analysis. Contact admin@ramprate.com