Amazon Trumps All Other Suitors in Quest for Hulu

Amazon Trumps All Other Suitors 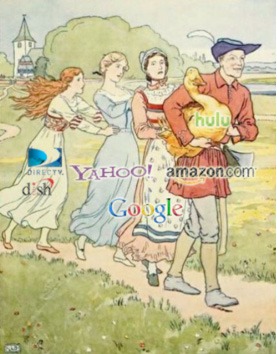 The battle for Hulu has come down to a few prime fighters hustling for victory. I’m placing my vote that Amazon should be the winner. Well, that is for a consumer win. There’s been a lot of courting to acquire Hulu from News Corp., Walt Disney, and NBC Universal’s Comcast. And while these Hollywood honchos rarely run a profitable business online, they do love the smell of early cash. Of the many trying to grab Hulu, including Google, Yahoo, Dish Network, and DirecTV, I think Amazon should get the ring for the many gifts it can present. Amazon has more ways to monetize film and TV brands, thus putting more money in the pockets of Hollywood. Amazon does a better job of marketing than anyone else. It is also best positioned to cross-market the video properties with affiliate commissioned sales of music, merchandise and books. “Advanced merchandizing will be a key ingredient for success,” said Phil Wiser, EVP & CTO at ViacomCBS, former CTO of Sony and founder of Sezmi, a global cloud-based TV platform and a veteran of marketing content online. “We are at the brink of a seismic transformation for the TV industry,” he said. “Online video technology has evolved to a point where it can truly replace a traditional pay TV platform in the home.” Media executives are reluctant to admit this is the case, but they know there is a sea change occurring. Indeed, Hulu was created largely as an experiment to see how the process works. But Hollywood has a shameful history of turning their golden video properties into online sawdust. For them to get it right they know it’s time to set Hulu free. How they will handle the sale is a tough one to call. As I pondered in my previous story on Hulu, will its partners sell to the weakest competitor or to whoever is willing to strike the richest deal? At least they have the hindsight to have seen first hand how the music industry mismanaged their digital properties. “Looking back at the music industry, the digital business only really scaled when the content companies stopped trying to do it themselves,” said Wiser. Steve Jobs came to the rescue with iTunes, though it contained a few sour notes. “They effectively created a monopolistic retailer,” said Wiser. Amazon is best positioned to offer Hollywood a win-win proposal. It has the best business model to weave the video content into multiple revenue strings, thus being able to hand over a golden cloth that Hollywood mavens will be hard pressed to resist. “Of all the suitors, Amazon is the least objectionable to the TV networks’ traditional cable distribution partners,” said Jack Meyers, media economist and publisher of Jack Myers Media Business Report. “Hulu has the established infrastructure, financial leverage and consumer relationships to justify the inflated investment.”

Amazon Trumps All Other Suitors, blows away the others starting with the basic economics of how online businesses are valued.

It has the lowest client acquisition cost and the highest lifetime customer revenue. The other suitors are not really prepped for prime time. Consider that Yahoo is foundering and has pretty much destroyed all the properties it has acquired in the past. If the Hulu owners simply want their baby to wither and die, than Yahoo may be the right choice. Google has been working on its online video strategy for years but has yet to show how to market TV and movies profitably. Yes, Google’s YouTube is the 800-pound gorilla in video content, if skateboarding dogs, curious cats, celebrities by accident, and music videos are what lights your fire. Google’s job is to sell ads, not content. This counts against Google as Hulu’s acquirer as another losing proposition for the consumer. The other potential suitors have problems that may also lead to a lousy ending for Hulu. Amazon is not going to let the eggs of the Golden Goose that is Hulu rot. It’s obsessed with customer service and satisfaction. Amazon was rated No. 1 among online retailers in customer satisfaction in a Top 100 lists compiled by Foresee Results, displacing Netflix from the top perch. Customer satisfaction drives customer retention. That drives customer loyalty and revenue growth. I am confident Amazon buys content licenses for less than similar licenses sold to Netflix, who is spending its public coffers kitty in a mere land grab, rather than Amazon, which is disciplined in their process and valuation. But wait, there’s more. Customer loyalty is a huge management challenge and Amazon has mastered it. It has achieved that partly by building the best online recommendation engine in the world, much better than Netflix, the assumed champion. Amazon’s recommendation engine puts their customers at the center first by homing in on their interests and proclivities. Amazon invested a lot of money and brainpower figuring out who you are and what you like and they back up your vote with your purchases every day. Amazon also has low cost and highest-scale delivery infrastructure and encoding facilities through Amazon Web Services. These are essential keys that put it in position to offer Hulu owners the best value proposition. The Seattle-based merchant also had the foresight to buy IMDb, the Internet movie database that gets more than 100 million unique visitors monthly who can watch film and TV content, including that from Hulu. Combine that with Amazon’s unique click-and-buy features and soon you’ll be able to buy the proverbial Jennifer Aniston’s sweater on a whim! Or buy the book the movie was based on through your Kindle. That’s cross marketing, baby, with proceeds to be shared by all. Then there is Amazon Prime, where subscribers pay $79 per year for preferred shipping and access to digital movies and TV shows. That’s about $6.50 a month, less than what Netflix charges and it’s pure margin. More than 100,000 videos are available through Amazon Prime service. Combine that with Hulu’s huge library and Amazon trounces its competitors. It could merge in Hulu Plus, currently available for $7.99 a month, for free. Current Hulu subscribers could be given instant access to Amazon’s massive library, making it a win-win situation. It’s still early days for Amazon Prime, but customers love it, even if they may overpay on locally-available items. In this case, does the 80/20 rule hold, where Amazon Prime is a heavily subscribed, under-utilized service? As noted here, while Prime may seem to be simply about shipping, it is really about bolstering customer loyalty and encouraging consumers to buy more products than they might otherwise purchase. There are some other ideas why Amazon and Hulu make a good fit here. Put it altogether and Amazon has more resources than Netflix, Google, Yahoo, and all the rest. Amazon has other incentives. It’s ready to unveil a full-fledged tablet computer, which could very well be tightly integrated with Amazon Prime and Hulu video services. Wrap it all up and Amazon is a favorite suitor, with a special connection. Hulu CEO Jason Kilar has had a close relationship with Amazon CEO Jeff Bezos. Kilar had a 10-year career at Amazon, ending up as senior vice president for application software before joining Hulu as CEO Lights. Camera. Action! ~~~Buy!