The Myth of the RFP for Everything at Half Price

The Myth of the RFP By Tony Greenberg 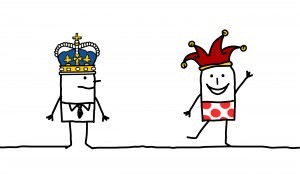 A long time ago in a business not so far away, a king sat considering his fate. The weather had been poor during the last growing season, the peasants were getting restless, and neighboring kingdoms were either disappearing into the abyss or raising invasion armies that he couldn’t match. The King sat wistfully wondering what to do when the guards announced a visitor – a traveling Jester. “Greetings, my King,” said the Jester. “I bring you notions, potions, and, most importantly, solutions far beyond your imagination. We have threads of the finest glass fiber, and crystal balls with centers of pure data, and trained gnomes to support any furniture you want – whether it’s a table, a server dish, or even your royal desk top.” The King had seen this Jester before, as he had entertained a regular parade of Jesters peddling “The Solution” to him for many years.

“He who hesitates is poor.” – Mel Brooks

“Be gone, “said the King. “I have issued a Request for Potion, to see which Jester can bring me ‘The Real Solution.’” “Ha,” said the Jester. “So you have. But we’ve all read your RFP, and we see it has many, many holes. Your ministers were only trying to impress you with their requests. Your RFP can’t possibly save your kingdom.” The King eyed the Jester carefully. He had been fooled before by Jesters promising magic and delivering mud. “My ministers promise me we’ve thought of Everything,” said the King. “My decree, my RFP, is certainly the best in all the land.” “Exactly, says the Jester. “Your ministers ask for Everything with no regard for reality. There is not enough gold in your entire kingdom for Everything. Your ministers don’t know what they need, only what they want, or think that an actually competent minister would want. All the Jesters in the land are laughing at the folly of your RFP, and they are also crying knowing that no one will save your kingdom.”

“Winning is the most important thing in my life, after breathing. Breathing first, winning next.” – George Steinbrenner

The King thought for a minute. And then he spoke carefully, “Will you rewrite my decree, my RFP?” The Jester smiled a little smile. Of course he would rewrite the King’s decree, the King’s RFP. He would include all the ingredients that his Solution contained, and exclude the details the other Jesters can give. If the kingdom was going to be saved, it would be saved his way. “Of course,” said the Jester. “I’ll do it straightaway.” For the next fortnight, the Jester worked long into the night, drafting and redrafting a new King’s decree, a new RFP. When he finally returned to the kingdom, he could see the King was quite happy.

“Experience is the name so many people give to their mistakes.” – Oscar Wilde

“I have your new decree, your new RFP,” said the Jester proudly. “It shall save the kingdom.” “You fool,” said the King. “Can’t you see it doesn’t matter anymore? Another Jester has already responded to my first RFP. He said it was fine. He said he could give me Everything. And for only half as much gold as my astrologer said I’d pay, with maybe a little more gold later depending on how things go. “ “And to top it off,” the King said happily, “he gave me this beautiful hat.” Many years later, the kingdom disappeared into the abyss as none of the new notions, potions, or solutions actually worked – each time just needing a bit more gold to turn the corner. But by then the Jester was serving mead at a local tavern and no longer cared about helping kings. The moral of the story, if you have read this far, should be obvious. Even if someone offers you Everything, the reality is you will probably get nothing. Except maybe a nice hat. But their court astrologers never did quite forgive us… SEND ME YOUR STORY or create one here We all have incredible stories of IT follies. Send me yours at t@ramprate.com and we’ll post them here. Your story might also fit our book planned for release later this year.

The Myth of the RFP – The Official Checklist for this Myth

1. Be prepared internally. Make sure you have buy-in and representation from all areas affected, particularly IT, finance and procurement. 2. Be aware of bias. The incumbent, whether a supplier or internal group, will lead you astray to satisfy their own desires. Consider bringing in an outsider. 3. Manage risk throughout the process, especially in the early stages. Include contract terms in your RFP. 4. Remember that price is not the deciding factor. Make sure you have a scorecard of all areas of importance, including stability of the supplier, cultural fit and service level agreements. 5. Get senior management buy-in early. Without it, you are going nowhere. 6. Write down your objectives and stick to the plan. You may not be able to get both lower costs and next generation technology. Pick the objectives most important to your overall business goals. 7. Benchmark your services and pricing against market. Ask for outside counsel if you do not have this information available. 8. Negotiate fairly, but with knowledge. You don’t want your supplier to lose money on the deal, they will just go away and leave you. 9. Don’t let the supplier write your RFP. Use a third-party advisor if necessary, but a supplier can’t help but write it in their favor, not yours. 10. Plan for change. No matter the length of the contract, the world will change during its course. Make plans to revisit the terms and conditions as part of a normal governance process.

PrevPreviousSmoking Gun Questions To Ask Your IT Sourcing Broker
NextIs There Such a Thing as Price Gouging and Price Fixing in IT?Next