It’s Time For A New Wave Of Investing

“You’re walking around blind without a cane, pal. A fool and his money are lucky enough to get together in the first place.” – Gordon Gekko in “Wall Street” 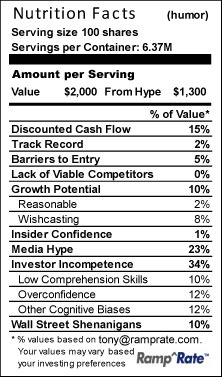 A week before Groupon’s initial public offering, Henry Blodget at Business Insider was telling readers he wouldn’t touch it with a 50-foot pole for reasons that amounted to, “It’s an insider’s game.” As Blodget expected, insiders were indeed the big winners. Investors who bought at the peak that opening day are now down about 20 percent since then. The only good news for investors: at least they’re not in the territory of Demand Media, which now trades about 70 percent below its first day of trading back in January. Investing in IPOs today screams “caveat emptor.” But do we listen? The prospect of investing in something that all our friends are using seems to be as irresistible as super-sizing a fast-food meal — and can be equally bad for our (fiscal) health. There’s also the view that if people are buying things they don’t understand, they should lose their money. It’s called capitalism, redeploying money to smarter people so it can be invested more intelligently.

I agree that capitalism should not reward stupidity but we also should make it a little safer for non-insiders to invest. Why not increase transparency and let outsiders see what’s really going on in a company? Perhaps it’s time for the equivalent of nutritional content labels on investments that outline, in plain language, just how much risk we’re taking. And maybe it’s time we also start asking if there are better ways to invest, not just for us but the health of our planet. What’s happening now with a growing trend called “impact investing,” defined as for-profit investment made to solve social and environmental problems. “Impact investing will need to scale to an enormous level for these solutions to be achievable,” said Eric Kessler, founder and principal at Arabella Philanthropic Investment Advisors, which advises philanthropies like Gates Foundation and Rockefeller Foundation and touches nearly $1 billion in grant and impact investment portfolios a year for. “Profitable, socially-driven businesses are the only sustainable solution. Philanthropists are awakening to that now and transforming themselves into impact investors.” As things currently stand, it’s turned into a bit of the Wild West for investors. In an era of Occupy Wall Street and too many investing scandals, the impulse is to blame fraud or at least insiders who take liberties at the expense of the rest of us. True, neither Groupon nor its underwriters held a gun to anyone’s head to buy a single share. Key information, from insiders taking money out to decelerating revenue growth, was thoroughly and publicly documented, as per all SEC regulations and rules. But months before Groupon went public, breathless news stories were estimating a $25 billion valuation for the site. By the time the IPO put real numbers on those estimates, Groupon was valued at $13 billion instead, but even that seems optimistic for an unprofitable company founded three years ago.

Groupon is not the only example of misplaced “IPO-optimism.” Zynga, the online game company, was reportedly seeking a $20 billion valuation. It now expects to go public with an estimated value of about $14 billion, though some seasoned analysts think $5 billion is more realistic. Facebook valuations currently range from $60 billion to $80 billion, up from $500 million just four years ago, though the social media behemoth has yet to announce when in 2012 it may actually go public. 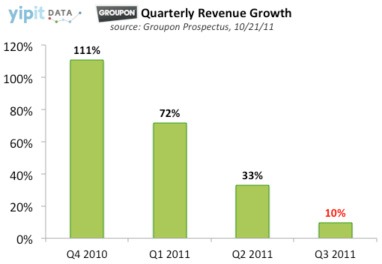 Ask a venture capitalist about these sky-high valuations and their response ranges from a shrug of their shoulders to a gleam in their eye. The bottom line, though, is they don’t know what to think. This is uncharted territory, with companies only a few years old riding huge valuations to ridiculous riches, at least for a few. “The biggest risk I see in today’s extraordinary Internet company valuations is the short length of time these companies have been in business,” said William Edward Quigley, co-founder and managing director of Clearstone Venture Partners. “The longer a company has been operating, the more secure its competitive position in the market and the more predictable its revenues.  Predictability is a core ingredient in successful public companies.” Quigley points to LinkedIn, which went public after a full decade of operations, with a seasoned executive team, strong internal and financial systems and a proven business model. Groupon, by contrast, has had none of those advantages. “A pubic investor should be more cautious when investing in companies that are still figuring out their business,” Quigley says.

This brings us back to what we are investing in and whether those investments are wise. One recent report looked at the dismal performance of new companies in the IPO market. During the past 15 years, the number of young companies entering capital markets through IPOs has plummeted relative to historic patterns, hobbling job creation. The report, “Rebuilding the IPO On-Ramp,” also had a number of recommendations, including the need “to improve the availability and flow of information for investors.” 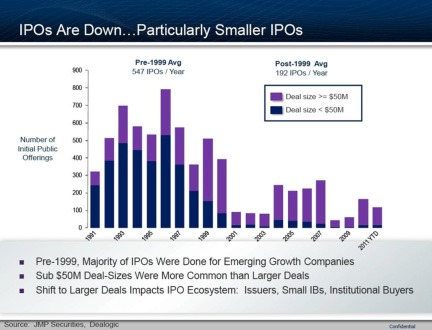 Regulations have driven up costs for young companies looking to go public, the report says. At the same time, institutional investors are leery of buying stock in startups because their risk levels are much higher. “Right now, there is very little capital available to these emerging companies,” said Wall Street investor Terren Peizer, Chairman of Socius Capital Group. Peizer said more than 4,000 publicly traded companies have market capitalizations of less than $300 million each. Companies that small just aren’t attractive to choosy institutional investors. “These companies are unable to attract capital on viable terms, if at all,” said Peizer. “Increased regulatory pressure has had the unintended consequence of choking off capital access for small companies.”

“In today’s regulatory environment, it’s virtually impossible to violate rules … and this is something that the public really doesn’t understand. It’s impossible for a violation to go undetected.” – Bernard Madoff 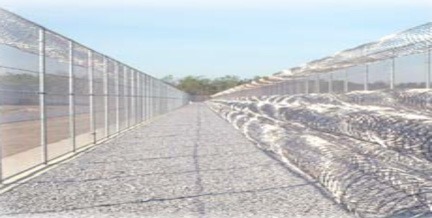 All of this leads me to hope there will be a greater emphasis on impact investing, which may help resolve these problems. The Rockefeller Foundation started looking at these issues in 2008 when it developed a set of guidelines for “Impact Investing and Investment Standards,” or IRIS. As part of the process, the foundation developed a common reporting language for impact-related terms and metrics. Out of IRIS came the Global Impact Investing Network Investors’ Council. GIIN was set up to identify how investor funds define, track, and report the social and environmental performance of their capital, in a way that’s transparent and credible. In my company, RampRate Sourcing Advisors, which deals with similar issues of managing risk in an opaque environment, I’ve learned that it’s not about making a single right decision. Instead, it’s about hedging, diversifying, and understanding your risk vs. reward. It’s also about doing what’s right. So much of what’s wrong with the investing picture today stems from the basic human impulses of fear and greed. People are afraid they will miss out on something big, which is the attitude that helped puff up the housing bubble. And that fear leads to greed, as people pay big bucks now, hoping to reap huge returns later.

Perhaps it’s time we put fear and greed back into the bottle and focus on how to invest for a better tomorrow that makes all of us winners.

PrevPreviousJumping Through Hoops with Hulu will Hollywood Kill Their Offspring Again
NextBusiness At The Speed Of Light – What is a Millisecond Worth?Next

RampRate is a global advisory firm that has served enterprises looking to reduce cost, risk, time, and the carbon footprint of their IT supply chains for 20+ years.