Business At The Speed Of Light – What is a Millisecond Worth?

Business At The Speed Of Light In the low-latency world of high-frequency trading, some will lose, no matter how smart their systems and people. Can you catch up? Or should we slow them down? 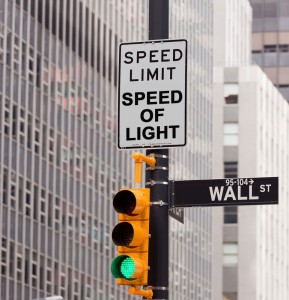 Speed thrills, especially near the speed of light. For Wall Street traders, speed creates new fortunes on the world’s fastest networks, for makers and users both. But those technologies require lots of money and brainpower, creating questions about unfair advantages for privileged insiders with the fastest networks and best relationships, even as regulators ponder what to do.

Welcome to the future, where winners are determined by who arrives first with the most intelligence. Whether it’s making a killing with a million-dollar trade, snagging choice concert tickets,  or sniping an eBay auction, technology’s next big leap is nearly here. Low-latency networks will reshape most industries, even if they never approach the speed of light.

Finding Alpha Between Each Tick of the Clock 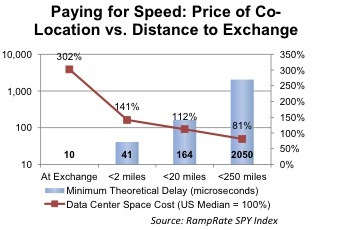 Through my firm RampRate, I have watched companies pay big money to get even a mile closer to the trading floor. Trading speeds have accelerated to millionths of a second, with nanosecond reactions coming. Sophisticated financial traders are zipping in and out of positions in less than a heartbeat, generating billions of dollars in arbitrage profits. “The people who are upset with the leaders of the pack (for being) like genetically altered Olympic hopefuls hopped up on performance-enhancing drugs are people who want to be big players,” says Chuck Ocheret, formerly head of Deutsche Bank’s platform solutions. “But they don’t have good alpha-generation principles, and aren’t smart enough to achieve ultra low latencies anyway.” But are the millions spent optimizing latency (some of which trickle down to my company, which advises companies on the right co-location centers and networks) truly creating market efficiency? Who really needs this speed? How Low Is Low? Depends on Your Business Low latency is heady stuff. But not all industries need to flirt with the speed of light t to create competitive opportunities now. What counts as low latency in your industry will be a crucial differentiator in your success. So, speed is vital, but so is perception. Companies such as Gomez and Keynote prevent latency gaffes a user might notice that can affect brand image, customer satisfaction and employee productivity. Slow can be a blow, no matter the industry. The most likely immediate low-latency candidates are industries with lots of bidding or trading and massive data analysis. Financial news outlets are obvious, the velocity of information creating arbitrage potential. Companies such as Activ Financial not only get the news to traders faster, but interpret it too. 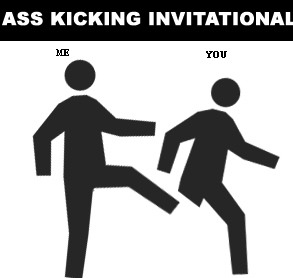 Auction sites are ripe for adjustment, as seen with eBay “sniping attacks.” So too is the legalized gambling of the penny auction. Second place in a penny auction is worse than not playing because you’ve spent money on all those penny bids, yet bought nothing STATS LLC provides sports fans (bettors) rich, fast data on 234 sports, including pitch-by-pitch and play-by-play updates, using the same analytic concepts used in financial markets. Betfair.com, the UK gambling giant, uses high-frequency data to respond to news that causes rapid adjustments of prices and odds. Who Profits? The Infrastructure Play In my work, I’ve seen buyer approaches range from bashful to brazen. Some clients strongly prefer specific geographic and network topology locations that we know are close to trading floors. Others say money is (almost) no object if it speeds their London-Singapore link by 10 milliseconds.

“It can be difficult to imagine how milliseconds or nanoseconds of latency make a significant difference,” says Internet technologist and RampRate CTO Steve Hotz,   “but from the viewpoint of a data transaction making the trip hundreds or thousands of times, that incremental advantage can add up.”

Hibernia Atlantic is building a $300 million trans-Atlantic cable to cut data transmission 6 milliseconds compared to Global Crossing. Spread Networks just linked Chicago to New Jersey with a high-speed connection. And if anyone figures out how to bore straight through the Earth, you can be sure they’ll have customers. Eyebrows are raised particularly when exchanges themselves sell low-latency links. Nasdaq’s co-location business has been under regulatory scrutiny since 2009, and the NYSE is seeking special permission from the SEC to sell more co-lo. Others can’t help wondering if this game is rigged. Are some competitors being kept away from fast links? And do some others get a cross-connect a few feet shorter, and few slices of a second faster in even the best locations? Many of these complaints are spurious, but can’t be totally dismissed. Markets thrive on confidence and transparency, and when people suspect cheating, they stop playing. The blame game is not reserved to unsuccessful players. Complaints erupted after 2010’s “Flash Crash,” when the Dow Jones Industrial Average plunged more than 600 points in 5 minutes, and then magically bounced back 20 minutes later. High-frequency traders did have a role in the crash, but analysts have said they were not at fault, there or in similar events. Some believe high-frequency trading unfairly advantages a privileged few. Others complain that it disrupts conventional trading. And though it creates undeniable efficiencies, it also creates undeniable perceptions of impropriety, which may outweigh benefits.

Business At The Speed Of Light – What Now?

Despite calls for more regulation, these networks are moving forward, evolving quickly. Already, more than 60 percent of U.S. financial trading (and a third of European trading) filters through an HFT platform. With physical laws doing what man’s laws cannot in limiting speeds, some believe current concerns will soon go away.

“Unless we change the laws of physics, the high-frequency/low-latency game has played out,” writes Larry Tabb of the Tabb Group research firm. Tabb says we ask the wrong question in wondering whether high-frequency trading is bad for the market. It’s already been transformed, with more to come. “We have seen a 2,000-fold drop in average core-trading latency in the last three years, and I think the move to measure trading latency in picoseconds is nearing,” says Christian Sommer, Intel’s director of capital markets.

It may be that the need for speed will simply hit a wall. Even measuring latency in picoseconds requires such sophisticated tools that it practically requires a CERN physicist. After all, a picosecond is to one second as one second is to 31,700 years.

“Light travels 30 centimeters in one nanosecond,” says Neil McGovern, Sybase’s senior director of strategy and financial services. “So if light can go only a few centimeters in a picosecond, how much faster are you going to get?”

In which case, markets will have to look elsewhere for competitive advantages, like being smarter. High-frequency, low-latency architectures will just be tools for executing a strong alpha-seeking strategy.

“The truth is that if you really have the talent on board smart enough to achieve true ultra low latency,” says Ocheret, “then you are probably smart enough to make money without it.”

Business At The Speed Of Light