A Historical Perspective on Blockchain 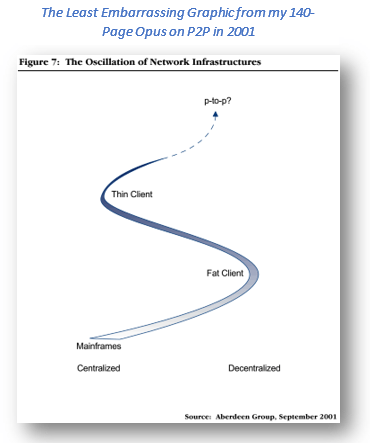 But not all waves turn into tsunamis. Shortly before the last big surge of centralization towards the cloud, there was a brief moment circa 2000-2002 when it seemed that a new form of decentralization – P2P (or P-to-P as my editor insisted on using) computing– would swing the pendulum back. Bolstered by the loud explosion of Napster, Limewire and other facilitators of the “information wants to be free” idea; as well as the more socially conscious pursuits like SETI@home and various protein folding distributed compute apps, P2P promised to bring power back to the periphery. Some of the most promising from an enterprise perspective – such as Groove Networks – aimed to reinvent collaboration as well. As a market analyst at Aberdeen, I had a front seat for that ride – conferences with visionary startup founders promising to change the world through decentralized technologies; anarchists ready to use it to tear down the established order; brilliant people like Larry Lessig, Ray Ozzie, and Clay Shirky developing an ideological framework for how to reshape our view of intellectual property and collaboration in this new world; and the most energy I’ve ever seen in any community until the blockchain.  And that makes the lessons of this forgotten wave relevant to today. P2P was, much like blockchain, more than a technology. It was a movement that expected decentralization to change the world. Much of the creative energy grew from a sense that information wants to be free – that with the wonderful world of the internet, the old protections around who gets to create, control, transform, and distribute content and data become woefully outdated. And, just like today, people were grappling with the problem of how to bring order and governance to this movement without undermining its core spirit.

Death Without a Blaze of Glory 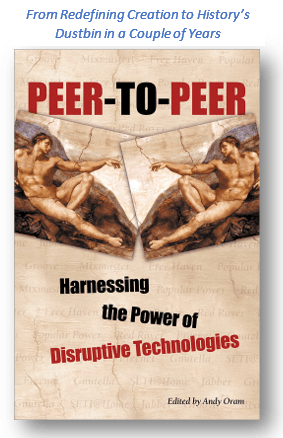 It’s not too much of a spoiler to reveal that most of the P2P movement fizzled. Groove got bought up by Microsoft, primarily to recruit Ray Ozzie, and then was slowly wrapped into Sharepoint with barely a trace of its P2P roots. Seti@home keeps chugging, albeit with much less cachet. Limewire, Kazaa, Grokster, and the like faded away in a blizzard of lawsuits, with pirates moving to bittorrent and legitimate users to iTunes and Amazon. Unlike the dot-com era, there was no Amazon emerging from the ashes; only one-liners on various distinguished LinkedIn profiles. A few concepts had a brighter future – for example, blogging has its philosophical roots in that wave of decentralization – the power to the people ethos of “anyone can publish” was still new and exciting. However, even that eventually got pre-empted by centralized social media platforms, and the legacy of decentralizing access to a global soapbox may wind up being the loss of consensus about the truth. With that ignoble crash in hindsight, even my conservative and skeptical publications on the subject look embarrasingly optimistic in retrospect. I’ll omit the embarrassing hockey stick market growth projections here. But one phrase from the report remains true: “after the hype dies down, there will be no more companies claiming to be P-to-P companies. Rather, there will be content delivery, high-end processing, collaboration, and information infrastructure companies using P-to-P technologies.” Substitute “blockchain” for “P-to-P” and it’s applicable today – you can’t be a blockchain company. You need to be a solutions company using blockchain.

The primary difference between the environment of 2001 and 2018 is financial. P2P was late to the investment insanity of the dot-com era, and came of age during a horrific technology crash where budgets were decimated and VC funding dried up. My comprehensive tally of the most viable P2P ventures at the time counted a total VC investment of $380M. The total market cap of the top 100 cryptocurrencies is, as of the time of this writing, $370B. That’s billion with a B – almost 1000 times as much as the P2P market. Some of it is ephemeral and subject to the ups and downs of bitcoin. But even a crash of 50% or 75% won’t bring the industry to its knees. VCs are also different from blockchain investors. While P2P had its idealist backers, none of them were prepared to drop much cash into new ventures with questionable legal status; uncertain revenue models; and unconventional goals, especially after getting burned on the dot-com crash. The blockchain has a small circle of bitcoin billionaires that can break the mold. Some are open advocates of the technology’s revolutionary potential, like Puerto Rico crypto-utopia crowd. Some prefer to remain more anonymous. But make no mistake, the goal of the blockchain game is not to make money – it’s to change the world. Finally, a more subtle difference is in the aims of this idealism. The P2P revolution was tightly entwined with the idea of the creative commons – that all creativity is based on what came previously and an overly rigorous intellectual property system protects economic rents while stifling future innovation. The slogan of this time was “information wants to be free”. This spirit of free giving is reflected in the wikis and blogs that proliferated during this time. The blockchain revolution retains a lot of the underlying principle, but recognizes that the creative commons has its own tragedy – in that monetization still happens, but the profits go to the platform, not the creator. The aim of many of the most popular initiatives centered around creativity is to not make information free, but to redirect rewards to the creators. This idealism does not change the fundamental idea that the blockchain needs to produce value to the users and not just re-invent the wheel. But it does create a different timeline and set of expectations for the ventures in this era.

Up Next: What to Do with Blockchain’s Fortunate Start?

Now what do we do with that power? How can the blockchain community focus its efforts on the right activities to be truly impactful? That’s the subject for the next post.

PrevPreviousHot sauce, is what I got, just remember that Sourcing, is what I got..
NextWhat Solutions are Best Built with Blockchain or NOTNext